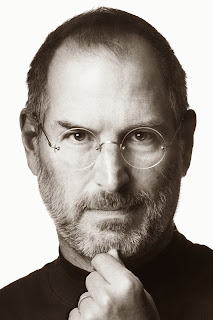 a.       When and where was the person born? How would you describe the person’s childhood or early life?

Steve Jobs was born on February24, 1955 in San Francisco. Steven Jobs spent his childhood in Silicon Valley. He was interested in electronics and gadgets, and he would spend a lot of time in his neighbor’s garage, who worked at Hewlett-Packard Company (a computer company). He attended Crittenden Middle School, but the area that the school is in is a poor area where kids were bullied. Steve was bullied at that school. It must have been too much for him because one day, he came home and told his adoptive parents that he wanted to transfer schools or he would never attend school again. Then the parents agreed and the family moved to another city, which was Los Altos.

b.      What accomplishment or event caused this person to become famous?

In 1976 Steve Jobs and Steve Wozniak formed Apple Computers and built their first personal computer. The next year Apple released the Apple Two which became the first widely-used personal computer in the world.

In 2007 Apple introduced the iPhone, the first phone with a touch screen and no keyboard. It revolutionized the cell phone industry.

c.       What was one thing you learned about this person that surprised you?

Jobs dropped out of Reed College after only one semester, he thought he didn’t see any value in it. I appreciate him because he took value as the important element when he decided to do sth. He knew clearly what he wanted to do and what he could make value for. He chose to deal with the computer and it turned out to be a great success.

d.      If you were asked to write a brief biography of this person, what three personal characteristics would you emphasize?